Almudena Menéndez González, Industrial Engineering student at the Polytechnic University of Madrid, will receive the award from the Chief Executive Officer of Acerinox, Bernardo Velázquez.
The Judges also made special mention of the project by Marta Muratori Sosa, from the University of Algeciras – University of Cádiz 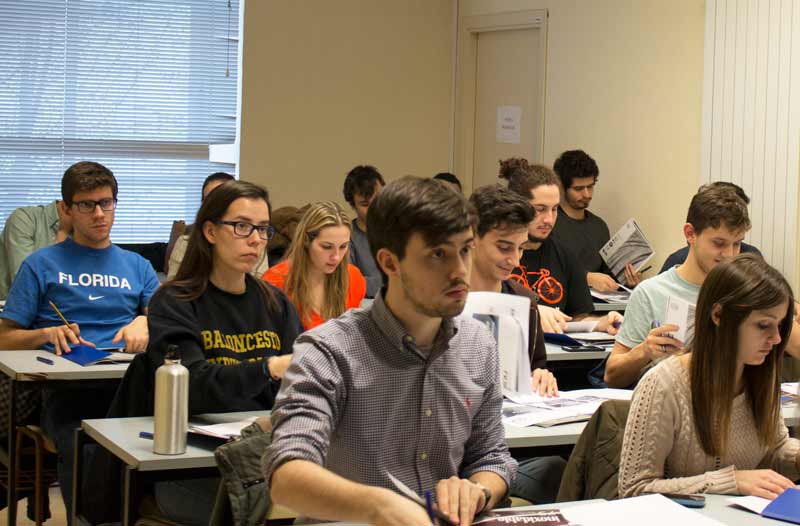 Students attending a stainless steel course at the University of Madrid

The Industrial Engineering student from the Polytechnic University of Madrid, Almudena Menéndez González, has won the Acerinox Award in its second edition for her project, ‘Surface functionalisation by means of LIPSS with femtosecond laser’.

The Judges have awarded this study on an evolving application for laser surface treatment of stainless steel (among other metals), with promising possibilities for future use in surface colouring and its hydrophobic properties, which could contribute to increasing the well-known advantages of stainless steel in several applications.

The award, developed and promoted by Acerinox in collaboration with Cedinox (Association for the Development of Stainless Steel), includes a cash prize of 3,000 euros and it will be presented to her shortly in the presence of all the members of the jury and management of Acerinox at a public ceremony.

The jury highlighted the excellent work of Marta Muratori, from the University of Algeciras – University of Cadiz, on an industrial application focused on the measurement of mechanical and structural properties of stainless steels by means of a non-destructive method. This project was not accepted for the competition as, before the final deliberation, Marta began working at Acerinox Europa, with her participation becoming invalid, as established in the bases.

The Acerinox award is available to university students who are carrying out their final year project for their degree or master, related to stainless steels, on their use, investigation or development, in order to promote knowledge on their application between young architects and engineers nationwide.

During the 2016-2017 academic year 1415 students from 19 engineering and architecture schools attended the training courses given by Cedinox.

Those responsible for the verdict in this second edition of the Acerinox Awards are the following professionals: